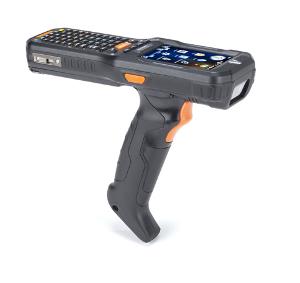 Janam Technologies LLC is a leading provider of rugged mobile computers that scan barcodes and communicate wirelessly. They combine deep industry knowledge with advanced technologies to deliver products with the right features and the right price. Their devices are purpose built for extended use in demanding environments, making their mobile computers a great match for the GSW software.

"Janam's customers work in highly demanding environments with computer systems of varying vintages and require a comprehensive, secure and reliable platform to connect to their host systems,” said Harry B. Lerner, CEO of Janam Technologies. “Our partnership with Georgia SoftWorks enables mobile workers to access all the systems they need to do their jobs, thereby significantly boosting productivity."

“It is important for Georgia SoftWorks to certify our client software on mobile computers. This allows us to verify compatibility between our software and the varied devices. Certification ensures that our customers have the optimal experience making their operation efficient. We extensively tested the GSW ConnectBot client on at least five different Janam mobile devices running various Android versions,” said Steve Lindsey of GSW. “Additionally, we also confirm correct operation over a network with the GSW SSH Server for Windows as well as the Telnet Server for Windows. Installation was simple and connections were extremely stable.”

Janam’s XG3 and XG200 devices are a part of their XG Series. These rugged gun-shaped mobile computers deliver superior performance and flexibility at a great price. The XM75 is packed with features, yet smaller, lighter, and less expensive than comparable products. The XT2/XT2+ and XT100 deliver all the technological advancements found in consumer devices with the mission-critical key features that enterprises require.

“The Janam devices are impressive and all performed admirably. Our software partnered with Janam’s hardware will be a powerful combination for anyone in demanding environments,” said Lindsey.

The Georgia SoftWorks SSH/Telnet Client for Android, SSH Server for Windows and Telnet Server for Windows are industrial quality software designed for superior operation in the most demanding industrial and commercial RF Terminal environments. Their software, partnered with Janam’s hardware, enables organizations to access their business-critical, server-based applications without any change to existing system infrastructure, eliminating the cost and time associated with new application development.